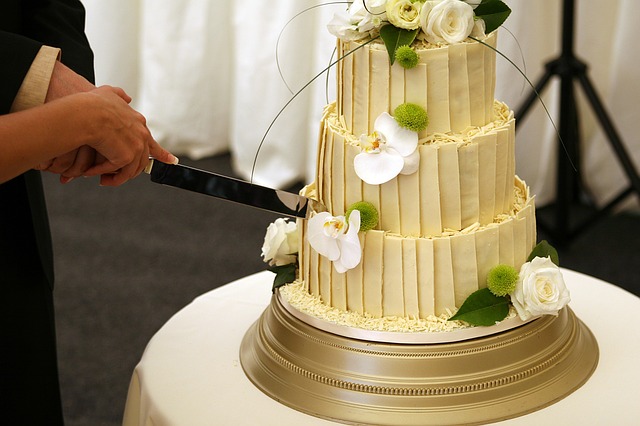 10 Wedding Traditions & The History Behind Them

Weddings are accompanied by traditions and customs that few of us have dared to find out about their origin. Today, modern weddings are furnished with flower girls, bridesmaids, groomsmen, and certain traditions such as the bride throwing a bouquet for her friends to catch. These customs often add some unique flavor to the wedding. Yet, they have an origin that few know about. A lot of these traditions actually originated in Rome, Egypt, and Greece. Here are some of the wedding traditions and a brief history behind each of them. Prepare to be surprised!

1. Cutting of the Wedding Cake

Ever wondered that there must always be a cake in any modern wedding? Another interesting fact is that it is normally raised above the ground. Well, this dates back to the ancient Roman tradition where bread cakes were broken on top of the bride’s head to induce fertility. The cakes were also stacked as high as possible to enhance good fortune to the married couple. The bread cake would then be cut and shared with the wedding guests so that they could absorb some good luck. So next time, when you eat a cake at a wedding know that the married couple is actually wishing you should get married. But if you are already married; well, blessings be upon your union!

2. Matching outfit of the Bridesmaids

In ancient Rome, the bridesmaids were involved in the wedding to confuse an evil spirit who was against the wedding. Since they had uniform outfits, the evil spirit would be confused on whom to lay its curse upon. This meant that the bride’s wedding would be a success and the couple would enjoy a peaceful marriage.

This tradition came up from the Ancient Roman Tradition, where young virgins were required to sprinkle wheat sheaths on the wedding pathway that led up to the altar. The practice was to bring fortune and well-being on the newlyweds. Currently, flowers act as a replacement to the sheaths of wheat that were initially used.

The circular nature of the wedding ring represents eternity. During the ancient times, the rings were made out of papyrus and they used to be tied around ankles and wrists. Later on, the Romans would substitute the material with iron. Archduke Maximilian is the one who started the tradition of diamond ring engagement when he proposed to Mary of Burgundy. Like circles, the diamond represents eternity because they are one of the hardest gems on the planet.
But why do we place the wedding ring on the fourth finger? This tradition came from the Egyptians who believed that the fourth finger had a vein that led straight to the heart.

Most people believe that white is the color that represents purity. However, blue is the true symbol of fidelity and purity. This can be traced back to early Christianity where Virgin Mary was often depicted to be wearing a blue robe to indicate that she is unblemished.

Rice has been since time immemorial regarded as a sign of fertility. Therefore, throwing rice onto the newlyweds is a symbol of showering them with good fortune. However, this practice has been replaced by modern alternatives like bubbles, confetti, and sparklers.

In the ancient time, the groomsmen would be hired by the groom to prevent any bride-kidnapping attempt by his competitors. Currently, the best man is equivalent to the groom’s best warrior back in the days.

This tradition dates back to the 5th century when calendars were based in moon cycles. The married couple would be served with an alcoholic beverage called mead which was made out of honey. This festival would only take place on the first moon of their wedding.

The Victorians used to place their wedding rings on pillows to indicate their wealth. These pillows were very expensive and only could only be afforded by the rich. A pageboy was responsible for carrying the wedding rings and pillows to the altar. This tradition is what has evolved to the presence of a ring bearer in modern weddings.

Back in the 14th century, the bride was required to toss her garter to a crowd of groomsmen. The groom would then try and save his bride from the scavenging mob. This tradition was finally replaced by a single to toss of the bride’s bouquet.
At this moment, I know you’re surprised by the evolution of these wedding practices from when they were first discovered. However, history has proven to us that we need to be a little creative when it comes to planning for this special day.