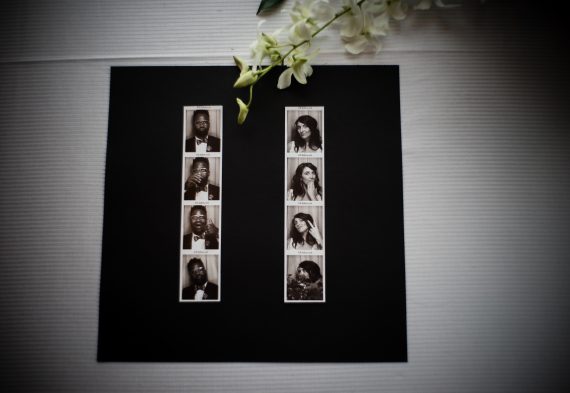 Erica and Zahir met at an oyster bar where Zahir was celebrating the promotion of a colleague he worked with on the TV show, Scandal. Erica and Zahir’s mutual friend and colleague, invited Erica over and introduced the two. Erica and Zahir bonded over mutual interests and experiences. While talking, they realized they actually attended USC’s FilM School at the same time, 10 years earlier, but had never met! All of the similarities were uncanny, even though it took 1 month before the two went on their first date.

Their first date lead to more time being spent together. Time passed and Zahir surprised Erica with a wedding proposal on the morning of July 23rd 2016, overlooking the beautiful Lake Hollywood and under the iconic Hollywood sign. Erica, of course said ‘yes’. The couple knew the perfect way to celebrate their engagement; with oysters at the spot they first met.

Erica and Zahir beat the rain on One Atlantic’s terrace with 200 of their friends and family as witness. They had a beautiful wedding ceremony on One Atlantic Event’s Terrace.  The couple were married by Zahir’s brother, Khary, and Erica’s sister, Rachel, with a brass band in tow to accompany them during the ceremony. Their reception was a image right out of  a vintage tropical hotel, completed with a photo booth to catch the love and laughs thoughout the night. The tables in their reception were decked out in tropical greens and bright magenta, accessorized with bamboo style chairs, that brought Palm Beach touches to a vintage Great Gatsby feel, all together for an amazing night of dancing topped with the couples favorite hip-hop songs.